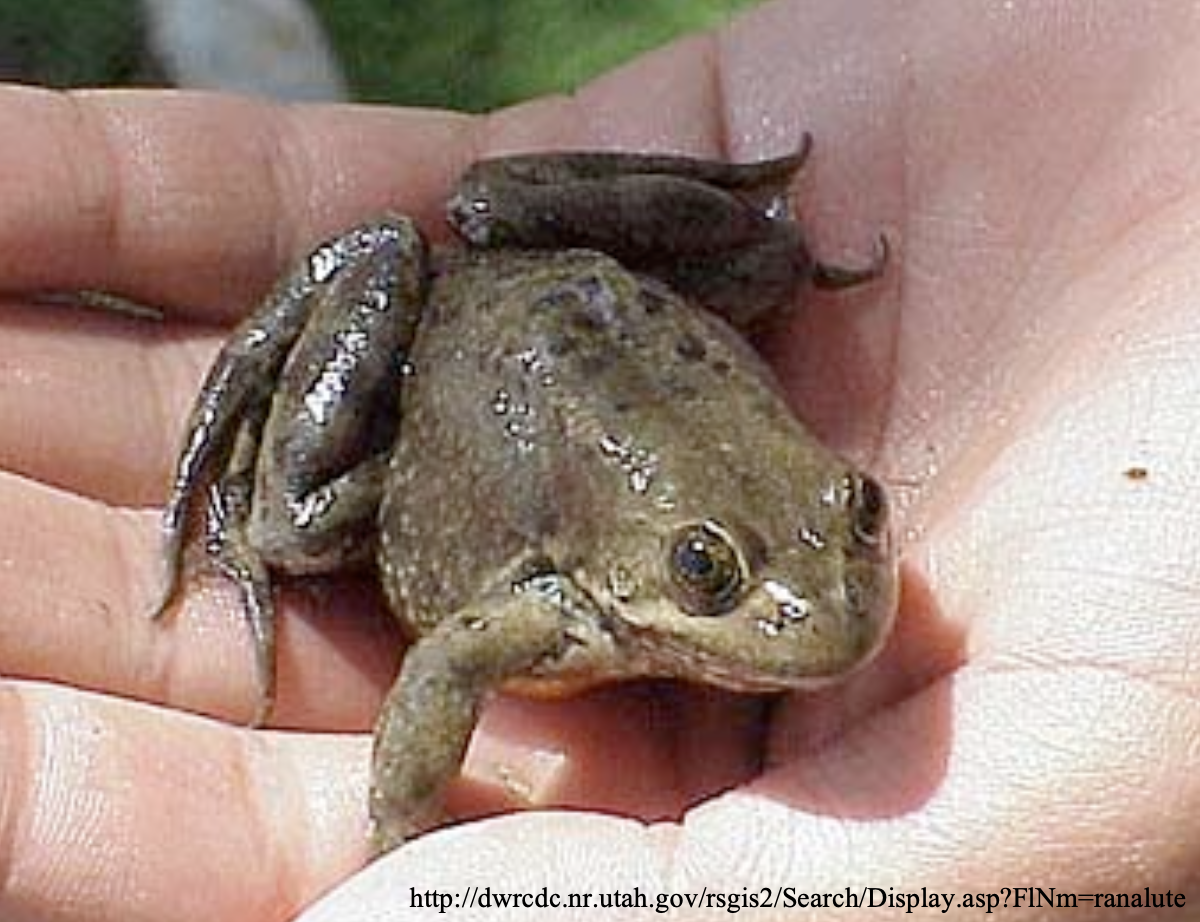 Our first day of personal interaction with the Grande Ronde River on June 19 was full of confusion, chaos, and most importantly for an amphibian fan like myself, wonder. We found not just one, but two Columbia spotted frogs Rana lueiventris while traipsing along Spring Creek and near the headwaters of the Grande Ronde. These frogs had the two characteristics that easily diagnose the species: upturned eyes and white jaw stripes that extend to the shoulder (Stebbins 2003). Each frog was about 6 cm from snout to vent and so were possibly sexually mature adults; when coupled with the spring breeding season, these two individuals may have been on the prowl for a sexy mate with which to continue the species.

Unfortunately, those were the only instances during our entire nine-day trip when we saw this happenin', hoppin' amphibian. I was disappointed that we didn't see more of this lovely little lady, because I wanted to get to know her better, I wanted to share and understand her world.
So, distraught, I asked myself why...why did we only see the Columbia spotted frog at the headwaters and Spring Creek? It wasn't food. Columbia spotted frogs feed primarily on insects, and there certainly was no shortage of bugs throughout the river (Bull 2005). It couldn't have been lack of predators, for while garter snakes (Thamnophis spp.) are known to prey on R. luteiventris and there were high snake densities at locations lacking frogs, there were also no frogs in areas lacking Thamnophis (Bull 2005). Temperature would seem a likely cause, though it too doesn't work: both the headwaters and many lower reaches of the Grande Ronde (which lacked R. luteiventris) had temperatures hovering around 17°C. Like most ranids, R. luteiventris is usually a pond breeder, and the small, lentic pools of Spring Creek seemed favorable for reproduction. Additionally, while the headwaters of the Grande Ronde had no visible ponds nearby, it did have a noticeably low hydraulic radius, which increases the probability of ranid eggs remaining submerged as discharge decreases throughout the summer (Kupferberg 1996). Also, Columbia spotted frogs prefer to forage on banks with thick cover (e.g., rockpiles, woody debris) adjacent to shallow water; such habitats were available at both the headwaters and Spring Creek (Bull 2005). These aquatic habitats are most common in small waters, thus implying that R.luteiventris is restricted to environments like the headwaters and Spring Creek. However, similar habitats were also available in tributaries further downstream, and thus this variable alone can't explain the distribution of this frog.

In conclusion, the best answer for why the Columbia spotted frog was restricted to the higher elevation waters is that there isn't one best answer, but many (e.g., small waters + Thamnophis presence). Hopefully, one of these days I can get back and spend a little more time in the world of R. luteiventris and increase our understanding of this slimy, yet sweet, amphibian.