Golden Stoneflies of the Grande Ronde River: Dive Bombers of the Insect World

Golden stoneflies of the genera Hesperoperla and Calineuria are large, unmistakable insects from the family Perlidae. They are long lived, often staying within the naiad stage for two to three years (Schollmeyer 1997). In spring, naiads crawl out of the water and emerge into adults, which quickly mate (Schollmeyer 1997). After fertilization, females slowly fly up in the air, then dive-bomb the river below with eggs by slapping the tips of their abdomens on the water's surface. Adults soon die after completion of egg laying, providing a veritable feast for scavengers. 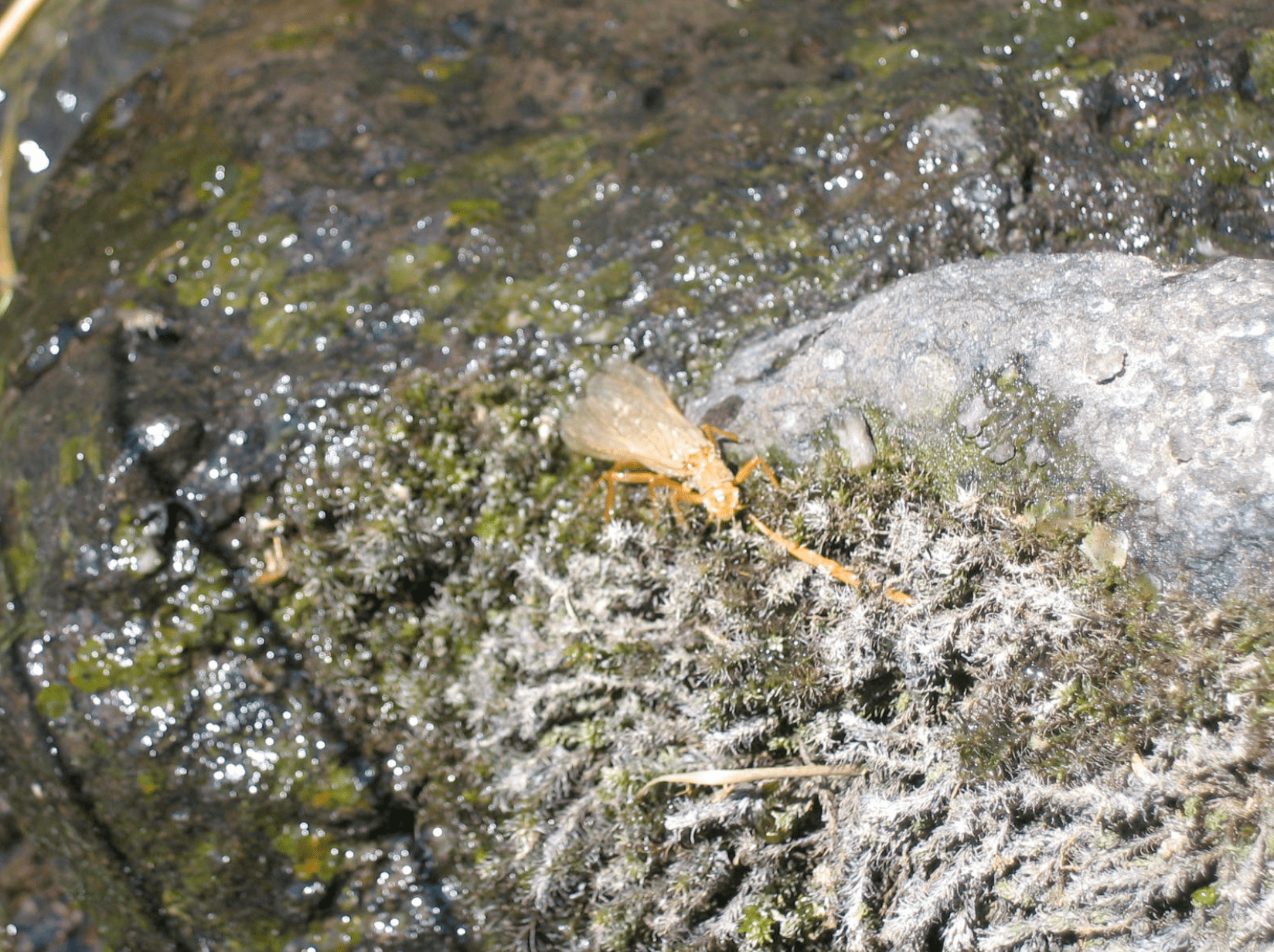 Photo by Peter B. Moyle

I was happily surprised by the plethora of golden stonefly adults present at the Grande Ronde on our first day on the river, for I'd only read about and never experienced such abundance. Apparently, many had just recently hatched, as I saw more than a few couples doing the wild tango on streamside vegetation. It also appeared that plenty of females had already had their roll in the sheets, as the air was thick with the ovipositing gals. I traced many of the fine ladies through their cycles or rise/dive-bomb, which had a paradoxically graceful clumsiness. Giddy at having finally witnessed such an event, I slept peacefully with stoneflies, not gumdrops, dancing in my head.

However, during our nine-day trip on the river, I began to suspect that something strange was afoot, for there seemed to be fewer and fewer golden stone adults as we descended downstream. Additionally, my samples revealed a decline in the number of perlid naiads. At first, I thought that the lower reaches were just too warm, since stoneflies are notorious for requiring oxygen-rich (and hence cold) water. Thankfully, I quickly squashed that erroneous thought, as the copious naiad shucks littering streamside foliage and rocks along the entire course of the river proved the presence of golden stones throughout the system. It was then that my logic took a more realistic tack. First, temperature is usually the primary variable cueing emergence. Second, lower elevations, and hence lower river reaches, warm earlier in the year than upper portions of a watershed. Thus, stoneflies inhabiting lower river reaches will reach the pivotal temperature stimulating emergence before those upstream, leading to the progressive presence of adults later and later in the year as one goes upstream.

Now, none of the above is mind-boggling; it's quite mundane, in fact. However, the decrease in adult stoneflies with the decrease in elevation is consistent with the smooth gradients predicted by Vannote et al.'s River Continuum Concept (RCC; 1980) and reveals something a bit more furtive about the RCC. In particular, the fact that a temporal continuum (seasons) led to a physical gradient (temperature) that led to a biotic gradient (adult stoneflies) intimates that the RCC can not only explain biotic continua caused by changes in the physical environment, but by those structured by time as well.