Snakes of the Grande Ronde 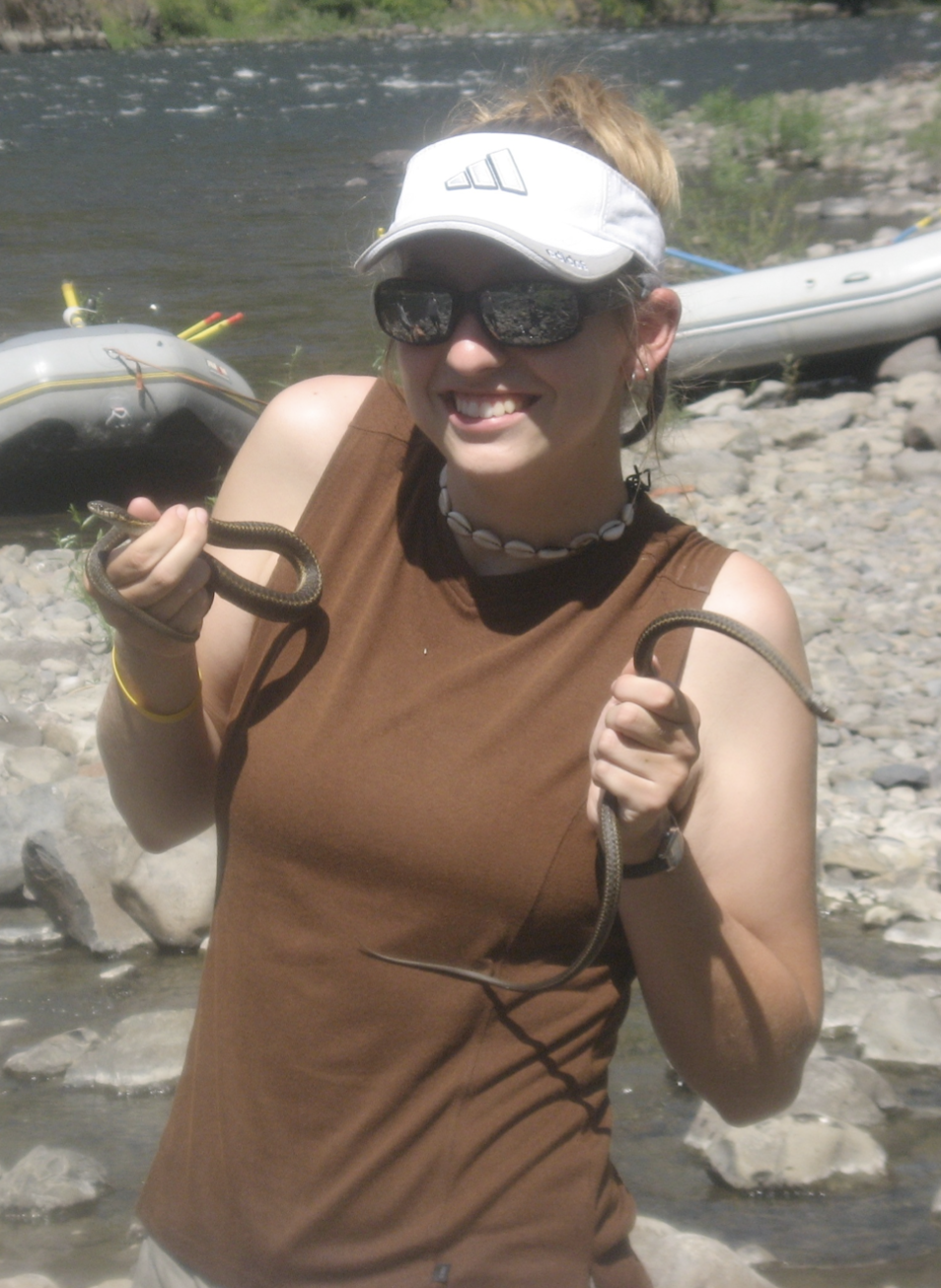 Take a look at Grossman Creek, our 6th sample site, for it really doesn’t look like anything special. The shallow creek came out of a small, but thick, riparian forest and flowed through a coarse-grained alluvial fan to the Grande Ronde River. Along the creek there were some heavily shaded areas, some nice cobbles, plenty of willows, and some woody debris—the perfect habitat for snakes. As I prepared to look for the ideal place to conduct a point count for a bird survey, my thoughts were interrupted by, “Hey a SNAKE!” Given the elusive nature of snakes and their other reptilian counterparts, I was always eager to handle the slithery creatures. Teejay correctly identified it by its possession of eight upper labial scales, mid-dorsal stripe, and single anal scale as a Western terrestrial garter snake, Thamnophis elegans.

After the initial excitement it was back to bird work, as usual. However, not five minutes later, another snake was found. This pattern persisted throughout the duration of our survey time. At the peak of the excitement I was holding one snake in my hand as I was running after the other. It was at that point that I earned the name “the snake charmer”, which ended up sticking with me for the rest of the trip. By the end of the survey time, we had recorded six Western terrestrial garter snakes, two of which were quite large, nearly three feet in length! The final snake of the day was found across the river at our campsite: it was a large racer, Coluber constrictor, the first of its kind we had seen on the trip.

Grossman Creek appeared to be an ecological hotspot for snakes; the most we had found prior to that site was three.

Wildcat Creek, a tributary about 10 miles downstream from Grossman, also had what appeared to be ideal snake habitat. There were plenty of large cobbles and wood around for a garter snake to hide under, bountiful shade (courtesy of riparian vegetation) and sun with which snakes could behaviorally thermoregulate, and a flowing stream-the ideal hunting ground for a Thamnophis elegans. However, unlike snake-rich Grossman Creek, Wildcat yielded only one of the agile, water-lovin', vent-emptyin' creatures. Since both streams exhibited similar habitats, why was one rich in garter snakes while the other lacked them?

It was originally a mystery as to why Grossman Creek had such a high abundance of snakes while Wildcat Creek essentially had none, since the two sites were so alike (e.g., substrate, riparian vegetation, elevation, etc). However, upon further investigation, the reason for the large discrepancy became clear: it was all about the fish.

Fish were both highly abundant and diverse in Grossman Creek, whereas at Wildcat Creek fish were pretty scarce. Thamnophis is largely aquatic, and prey most heavily on fish (Stebbins 2003). Thus, with all else being equal between the two creeks, it's clear that the higher amount of food in Grossman relative to Wildcat meant that you could support more garter snakes...which is exactly what we found.