What Angling Reveals: Salmonidae and Aquatic Insects of the Grande Ronde River

While most people go angling to relax and enjoy the outdoors, my purpose in dunkin' a line is quite different. For me, understanding the aspects of a fish (e.g., morphology and physiology), its aquatic environment (e.g., a small, brushy stream or a deep, oligotrophic lake), and its main food resource (e.g., other fish, stoneflies, midges, etc), and from that understanding predicting where and when a certain fish will be and what it'll eat, and then catching that fish with a lure or fly that imitates some aspect of its food that is presented in the right type of water, is the most gratifying example of a pseudoscientific experiment. Though lacking an appropriate control and being undoubtedly biased, patterns revealed by angling can provide insights into a fish's behavior and its relationship to other biota and the aquatic environment. 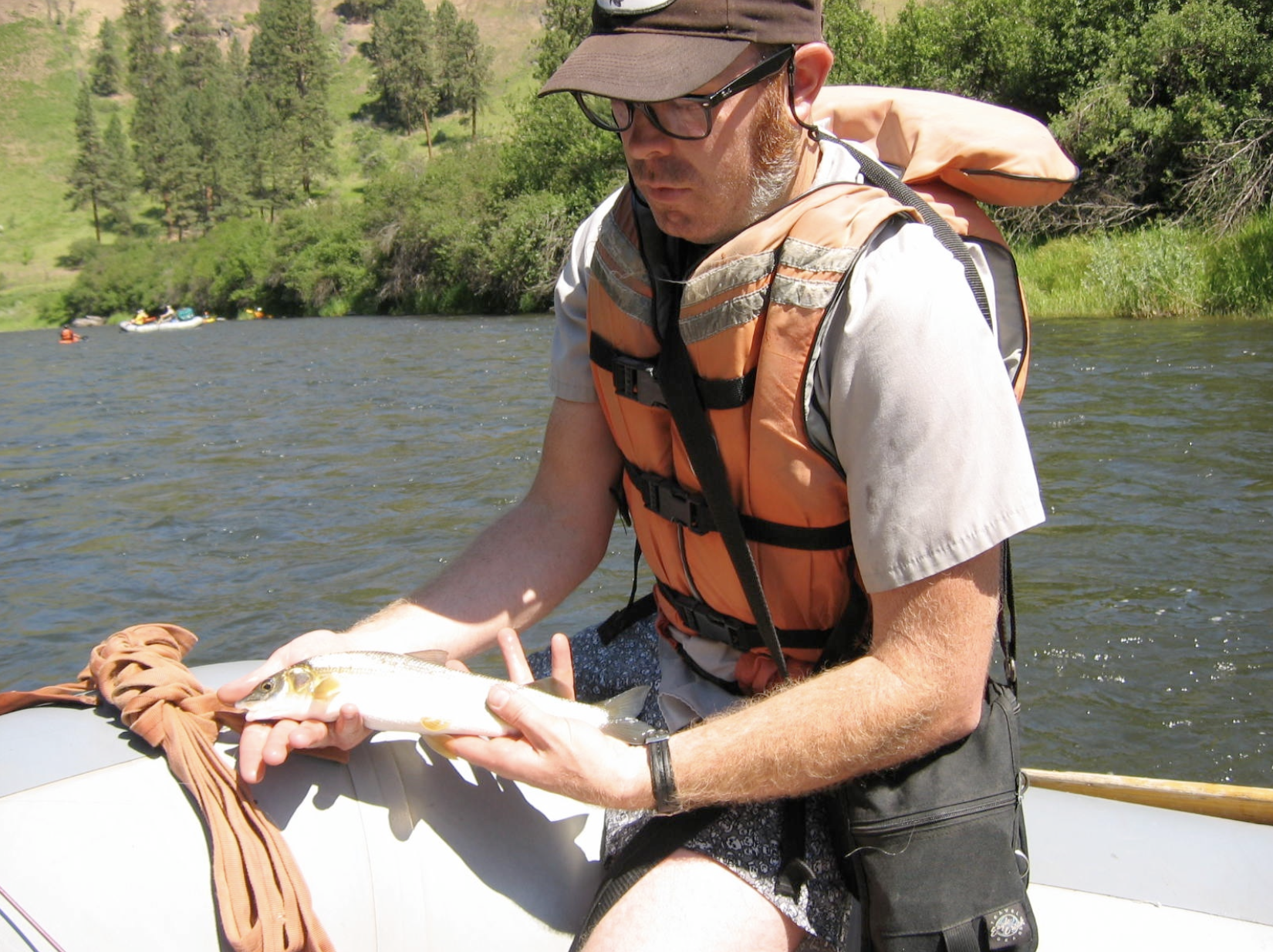 I was fortunate to be able to fish the Grande Ronde River from its headwaters to the mouth and experience some of those patterns. Most obvious were those exhibited by rainbow trout Oncorhynchus mykiss and Chinook salmon Oncorhynchus tshawtscha. In the shallow headwaters, I originally thought that trout would be in deep pockets, feeding safely out of a predator's view on subsurface aquatic insect naiads and larvae. Consequently, I began fishing such areas with nymphs and floats; surprisingly, the fish didn't attack the nymphs, but the floats. Consequently, I changed my approach and fished small, dull spinners right on the water's surface and was duly rewarded with a few lovely rainbows. As the trip wore on and we progressed downstream, I began to catch more salmonids on subsurface lures (e.g., fish imitations and nymphs) and less on surface lures. Specifically, near the thermal limit of trout and salmon, all fish were caught in deep runs and riffles on heavily weighted mayfly/caddisfly nymphs.

So why did fish in the upper reaches focus on surface lures and those in the lower reaches on subsurface lures? The most obvious reason is food resource: in the headwaters, the air was thick with adult, female golden stoneflies dapping the water with their abdomens (and thus were vulnerable to trout predation), while golden stone adults were absent in lower reaches that were instead rife with hydropsychid larvae. Strengthening this assumption was the fact that rises from rainbows in the upper reaches were nearly always splashy, which is consistent with feeding on quickly moving surface prey...like adult stoneflies. Additionally, the salmonid mountain whitefish Prosopium williamsoni in the Wenaha River (which empties into the Lower Grande Ronde River) went bonkers for deeply fished hydropsychid larvae patterns, and little else.

Now while our trip was within the context of Vannote et al.'s River Continuum Concept (RCC; 1980), and thus it may be a little too tempting and obvious to explain the seeming continuum of lure selection by salmonids with the RCC, the fact that there was a continuum that was likely based on a continuum of different insect families suggests that the RCC may not only be helpful to watershed scientists, but to anglers as well.